It has been a while since we have posted  about our Japanese adventures. The only excuse we can come up with is the weather…. it is so hot and humid in Onishi, that the normal tempo of life has gone done. A tempo of life which is already much lower than we are accustomed to in the West. Life here in rural Japan just takes its time. Whether it is because of the more agricultural roots, we don’t know but what we see is that the tempo of living simply drops to an all time low. Which is actually super!

Now you have finally the time to talk to your neighbour, while your are waiting for Mina to make your cafe latte. At Starbucks the average time for this is perhaps 1 minute, Mina makes it a work of art and takes 15 minutes, while at the same time keeping conversation going between the locals and us.

And we love it. The tranquility that comes with the attention for detail makes everything more intense and more valuable. All the food is a feast for the eye (and mouth) while having dinner is one big social experience. Interdependence and a we-focus is omnipresent in the Japanese culture and that is something of a relief for everybody who grew accustomed to the I-focus in our Western civilisation.

This week we received the wonderful news that our project is going into stage 2 via an artist in residence in Japan. The lovely people of Shiro Oni Studio have invited us to be their guest from the 16th of August right until the 26 of September when our residency will end with an exhibition. Shiri Ono Studio is situated just a little trip north-west from Tokyo and is -believe in luck or not- in the same area where mr Shiguhara spent the last days of his life. We will be part of the community of Onishi where we will life together we some other artists in the old brewery in the peaceful, rural parts of Japan.

We are very enthusiastic about this prospect and feel equally privileged that this project will continu from its beautiful start in Kaunas. We will off course keep you posted on all things happening!

Our last day in Kaunas. As we are preparing our presentation and film for our Artist Talk later today, we contemplate our stay as the Artists in Residence. It is with mixed feelings that we will go home again. It is certainly not a goodbye but more a seen you again, soon! Not only because we will finish our project here in Kaunas but also because the people we met have a place in our hearts and minds. The incredible friendliness in an often dark and gloomy place, the willingness to go along on our route of rekindling empathy and the experiences we shared, have made our visit something that will be in our minds and works for a long, long time.

Now it is time to go back home. To find the funds to travel to Kobe, Jerusalem, Eindhoven and Shanghai. To work with students in these places on their Art of Empathy and to bring all that material back to Kaunas to work with the great people of the Kaunas Photogallery on publishing this volume of work and thereby fuelling society’s debat on empathy. Only together we can define a better world for all of us.

Yesterday was high time for a Vilnius day, a day in the big city of Lithuania.
Completely different in atmosphere and with a more cosmopolitan feel than Kaunas. Along the borders of the river, big impressive steel constructions of modernistic architecture stand side by side with the old mansions from previous days. And when we stood on one of the borders of the river, we could not help notice that it had a bit of a Parisian feel to it.

Looking out on the Neris river, we stand with our backs to the Nacionalinė Dailės Galerija, or in plain English; The National Art Gallery. And we were stunned. By the building, its facilities, its art and the subtle way the building nudges every visitor to the next exhibition. From a temporary exhibition on the painter Algis Skačkauskas in the (enormous) basement, up the stairs to the permanent collection on the top floor. We spent over three hours feeling amazed and privileged.

Especially when we sat down in the cafe of the gallery with views over Vilnius sliding into the darkness of the evening. Truly mesmerising (or was it the excellent white wine?!)…

Our inspiration today, we found it on the 4th floor of a small apartment building, just around the corner.  We had the incredible privilege to visit the studio of Romualdas Požerskis, one of Luthania’s most outstanding photographers of the past 40 years. Together with his three friends (Antanas Sutkus, Aleksandras Macijauskas and Romualdas Rakauskas) they were a band of four that (against the state), worked extremely hard to put their country on the map by means of their photography.

Going through his images one couldn’t be more impressed by the crafts of the man who all his life had done his own developing and printing. So incredibly beautiful and technically perfect, it reminded us that we (and digital) still have a long way to go.

Especially true when you realise that all four of them more or less used the same approach, yet with completely different outcome. Sometimes for 20 years, they simple went with their subjects and photographed them. Day in, day out. Until they had a body of work that was immens and could only be shown when the time was right. Romualdus showed us his work for the ‘Catholic holidays’, which he started to shoot in 1974 and could only publish it in 1988. We seriously doubt whether there is one contemporary photographer able and willing to put so much time in their projects.

We are only one month on our way in this project…. pfff by his measures still an immense long way to go 🙂 This weekend is our first free weekend, free for some reflections on the past two weeks. We decided to go to Nida on the West coast and simply took the bus to get there. The weather grey and drizzly, perfect for some in-house reflections while looking out over the waters in front of our B&B.

In the past weeks, we walked the streets of Kaunas.
Over 155.000 steps, took us well over 122 km’s through the various parts of this town. Step by step and image by image, it created some strong reflections in our minds.

We felt the decay as well as the old grandeur.
Over a beer we discussed with three generations Lithuanians, the divide between young and old, between Russian romantics and European realists. Between the days when Lithuania stretched from the Baltics to the Black Sea and the sometime bleak days of the present. We felt the awkward history in the old Jewish getto and saw the pictures of mass murder. We were inspired by the human empathy felt in the museum of Mr. Sugihara and are puzzled about the grim presence of the people in the street. The city as such still holds promises and dreams for some, and a lot of disillusions for many others.

European money has done its best to lighten up the city, making it more beautiful by adding modern elements. Yet, literary next door are the sigs of old and bygone times because with a minimum wage of only € 300,=, a lot of Lithuanians still face poverty. Everyday the struggle for existence when your neighbours have raised an all shiny new house, is hard to do.

Kaunas in our minds is multiculti, yet it’s more of a difference in beliefs than in religion. Beliefs that are driven by the romanticised Russian history versus progress through the membership of the EU. Kaunas -and perhaps Lithuania as a whole- still has some generations to go to truly create one common identity in which there is room for all. Via our son, we came across the work of Estonian Madli Maruste (Phd Visual Sociology at Goldsmith Dept of London University) and she has said it very beautiful;

When someone`s roots are cut, then the routes in his life are disrupted as well. The city becomes a place to hide, but at the same time a place that haunts. The city is like a labyrinth of all the memories of people, who used to live there, but it is also a lost love letter to hopes and dreams that never materialised. When one ethnic group loses the places in the city that used to be the cornerstones of their identity, they might always feel homeless. Is it possible to fill this void in the soul? Can the city give them shelter and understanding, or is it hostile towards people who are the reminders of the layered history and sad secrets of a nation? 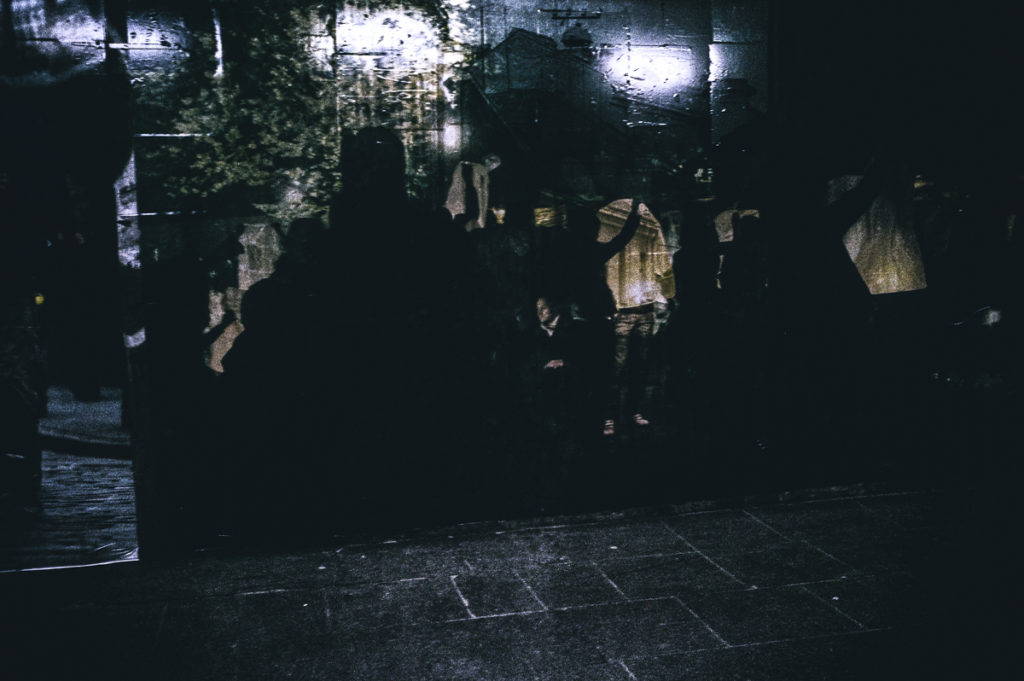 Perhaps this is also why we feel that our Art of Empathy has potential to go beyond just pretty images and nice words. Via the work with our students we connect to the new generation Lithuanians and use their process to rekindle the power of empathy. Much needed when trying to build that one identity over various groups. At the same time, images are such a big part of the history of this country that we feel we have the means to reach older generations as well. With the help of the people of Kaunas Photogallery we feel we can help start this journey in these sensitive times and needless to say but we feel extremely privileged to be a part of it. 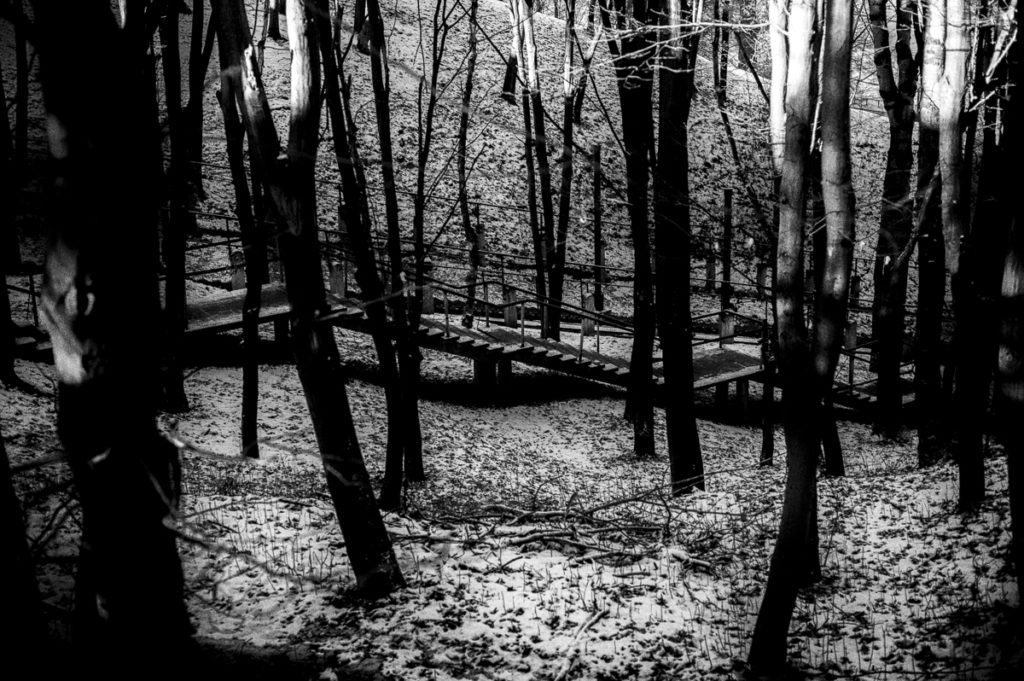 Photography in the DNA

Yesterday, after we did our own lesson, we had the privilege to be part of the reviewers team for the final exams of the first years students photography at the Faculty of Art at the Vytautas Magnus University. Under the direction of Romualdus Pozerskis, Tomas Pabedinskas and Laima Penekaite over 20 students faced their first semester exam, now had two additional foreigners to deal with and to do a presentation in English as well. For us it was a great experience and surprisingly enough, our ideas and that of the teachers didn’t differ al that much. Another insight was the level of work we had to judge. In most cases simply very good and after three hours of continuous reviewing and a nice beer, we concluded it had to do with the fact that in Lithuania photography is a big part of everyone’s DNA. It appears to be simply engrained in the education of the people. Something we witnessed as well when we pas Kaunas Photogallery on our daily walks; always were people of all ages inside, looking and discussing the exhibition.