The people in Lithuania are now 25 years independent. After having suffered Russian occupation and before that German, Polish etc., they are now creating their own future. Which is no small task to do, even if you are part of the EU. We see it everyday on the streets. It feels like a divide between the older generation, who (to our taste, represent more or less the old Russian traditions), whereas the youth is distinctive Western. This divide goes even further, right into the homes of the people.

Currently, all youth is being educated in the Lithuanian language, with English as a good second language. Almost everywhere there is somebody who speaks English and if you listen to the younger generations, their English is by all standards excellent. Their parents however are a different case, they simple refuse to speak Lithuanian let alone English. They stick to their Russian or even Polish language. That’s why when you are in a shop, you can here all these languages being spoken. And although we in the Netherlands also have our local dialects, still all of us are able to speak understandable dutch. It might therefore take another 25 years for Lithuania to reach that same goal and mostly so because the older generation by that time has passed away. 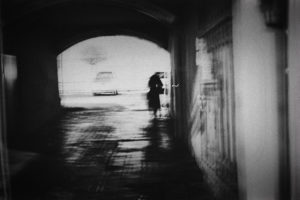 unexpected encounters
moods and people swinging by
some deeply touching
others fleeting by unnoticed
slow down, head up
for each encounter
is send along for a reason 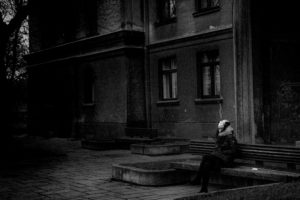 On the corner of the square at the old town of Kaunas is a statue throwing shadows on the wall. Stern looking, the arms crossed in a closed and defensive posture, he feels himself standing above the ordinary people. The guy walking in front of him feels this. He even moves as if he is small and unimportant. His head is facing the ground in front of him. He is no more than his own shadow.

Why is it that we ‘raised’ some people to a higher level?!
Even if they need to be remembered by all, aren’t they still human in each and every aspect of their being. We are all the same, all capable of doing extraordinary things. And for the most these go unnoticed, because they stay between two or more people.

Wouldn’t all our lives become more beautiful if we treated each and everyone equally, based on true and genuine empathy for the other. We would create understanding instead of disagreement, we would stand next to each other instead of becoming opposites and we would have the opportunity to make live better for all of us! Cracks of the present